Blogs on Food, Music, and Anything Else

Cyber bullying is a form of harassment that takes place predominantly online; basically they are the internet version of real-life bullies. Doctor Larissa Hirsch, a New York-based pediatrician, wrote an article saying, “Bullies have been around forever, but technology now gives them a whole new platform for their actions.” This is a newer way for kids, teens, and maybe even adults to attack their victims. Unlike the old-school bully, cyber bullies don’t attack their victim(s) physically. Instead, they message them hurtful words, post mean phrases and calling them out on social media. Many kids today fall victim of cyberbullying, and with the easy access to technology, it is only getting bigger. However, most people do not look at the whole story of the incident; people only see cyberbullying at its face value. No one takes the time to question the relation of the two people, what the conflict is, how it started, etc. Everything that happens before the cyberbullying incident has to be taken into consideration to fully evaluate the situation and eventually find the cause and/or root of cyberbullying. Cyberbullying is a problem that can be very avoidable and preventable.

In a hypothetical situation, two people have a debate online over some obscure controversy. This debate later turns into a heated conflict between the two persons. So far, no one is being cyber-bullied. In this hypothetical situation, person A decides to call person B a “fat jerk”. Person A says this only as a way to fight back in the conflict, with no malicious intent. Person B, however, sees this message and takes it personally, accusing person A of “fat-shaming” them. Are we now able to determine who the bully and the victim are? Although person A said something that hurt person B, they had no intention of hurting them in such way. Person B takes the message from person A more personally and feels attacked. Victim/bully labels are usually assigned when someone perceives a word/phrase and takes it to a personal context and feels attacked. If we were only told about the name-calling, then we could safely say that person A is the bully and person B is the victim. This is where the problem lies. People are quick to assume the situation based on its face value. If this keeps up, then cyberbullying will blow up into a situation that is not as problematic as it truly is. The fact that cyberbullying can happen accidentally shows that cyberbullying isn’t the real issue.

Besides the fact that it can come up accidentally, cyberbullying has another thing about itself: it is very avoidable. Keep in mind that this takes place online. If someone is being bullied in an online chat or social media, just turn the device off. Unlike real-life bullying, cyberbullies are not in front of you in person. In real life, the bully(s) are in front of you and stay there until they get their satisfaction. Bill Briggs wrote an article on the topic of cyberbullying, mainly on how cyberbullying is “not as rampant as thought”; Briggs described real-life bullying as ‘“repetitive episodes of abuse carried out by one person who is viewed to have more power, usually physical, over the victim.” If someone is getting mean messages on Facebook from someone, just log out and turn the computer off. It is almost amazing how avoidable these conflicts can be. Bullies on Facebook and Instagram can easily be blocked and reported(this can be applied to most social media), and almost every device has the ability to be shut off so that in itself is another method of avoiding cyberbullies. Once social medias are logged out and the screen turns black, the cyberbully is gone; people can go about their day and enjoy the real world rather than sitting in front of their bright screens and submerge themselves in hateful messages. In a sense, cyberbullying can be considered to be self-induced. This may come off as an unpopular opinion, but with the way cyberbullying is set, it is not completely wrong.

Again, cyberbullying is self-induced. Now as obscure as that sounds, it makes sense. No one is being forced to spend their time on the internet, and no one is being told to post their content(s) on social media either, whether it be a video on YouTube, a picture on Instagram, or even a status update on Facebook. When someone puts something on the internet, that post is bound to come across those that people call “internet trolls”. Some may say “but people from school comment mean things on my post. Isn’t that cyberbullying?” and to that I say no. When a real life bully that attacks someone on a daily basis at school takes measures online, that is not cyberbullying. That is only an addition to the real life bullying. Cyberbullying implies that all the bullying is done online. If someone interact with people only online, chances are they are nothing but complete strangers to them. The words of a stranger should mean little to nothing to anyone. It is only when their words are given meaning that they become hurtful.

Now there is always two sides to a story. There will always be people that say that cyberbullying is still a huge issue, and I don’t disagree with that. There are statistics shown that almost fifteen percent of teens and adolescents claim to be bullied on the internet in some way, shape, or form. Now that is only one research study, and there are many more that rallied up a score of anywhere between thirty to seventy percent of teens being cyberbullied. These numbers are drastic, but they are based on the United States alone. If we look at countries like Japan, a very populated countries with technology advancing just as fast, if not faster, than America. With technology being everywhere and people being on social media, there is no doubt that there is an immense number of kids being bullied online. Here is a chart from the Cyberbullying Research Center graphing out the results they got from a survey they conducted in 2016 on over fifteen thousand students that attended middle school and high school. 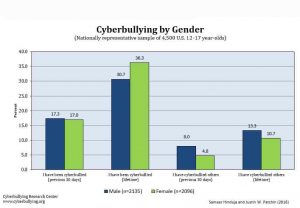 They have claimed this to have been one of the largest, if not the largest, national survey that has been conducted on this issue. Previously, I have stated that cyberbullying is avoidable and self-induced, but that does not take away from the fact that it is still a major problem that needs to be fixed.

With the advancement of technology and accessibility being at an all-time high, there are more kids on the internet than ever, many of which are younger than most adolescents (10-14 years of age). Being that young, they have little judgement of what they are browsing on the internet. For them, the responsibility to monitor their browsing lies on the parents. Being the parents of the kids, they have to be able to look after their kids and their usage of the internet. Fortunately, there are steps that parents can take to avoid and even prevent their kids from being cyberbullied. For starters, when they first find out their child is being a victim to cyberbullying, the parents should offer comfort and support to them, telling them that they are more than what they bullies are saying; they should get involved and let their kids know that they are not alone in this problem. Telling the child that it is not their fault is very important. Many children subject to cyberbullying tend to believe that they are being harassed because they deserve it. This can lead to negative effects, such as self-hate, depression, and in the extreme case it can lead to self-harming and even suicide. Once the parents have found out about the cyberbullying, they should limit their child’s access to the internet. In doing so, they won’t be able to feed into the cyberbullying and continue to see the hateful messages. Also, it is important to block and report the cyberbullies to prevent any further conflicts.

There have been many points made here, and some may be more controversial than others. The fact that cyberbullying is a problem remains the same, but that does not take away from the fact that it is very avoidable and preventable. I have not been personally subject to cyberbullying myself, so my words may not be as credible as someone who has gone through the experience. Even so, I hope that this has shed some light on my perspective of the topic of cyberbullying.